Question 4.
The maximum speed of vibrations which produces audible sound will be in ……………..
(a) seawater
(b) ground glass
(c) dry air
(d) Human blood
Answer:
(a) seawater

Question 5.
The sound waves travel faster
(a) in liquids
(b) in gases
(c) in solids
(d) in vacuum
Answer:
(c) in solids

Question 2.
Name the physical quantity whose SI unit is ‘hertz’. Define.
Answer:
The SI unit of frequency is hertz (Hz). The number of vibrations (complete waves or cycles) produced in one second is called frequency of the wave.

Question 5.
You and your friend are on the moon. Will you be able to hear any sound produced by your friend?
Answer:
No, as there is no medium on moon for the sound to travel. 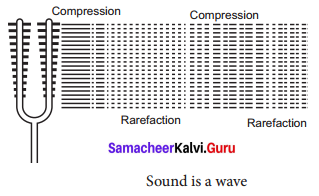 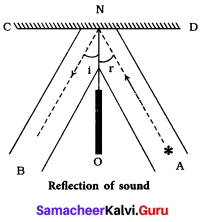 Take two metal tubes A and B. Keep one end of each tube on a metal plate as shown in figure. Place a wrist watch c at the open end of the tube A and interpose a cardboard between A and B. Now at a particular inclination of the tube B with the cardboard, ticking of the watch is clearly heard. The angle of reflection made by the tube B with the cardboard is equal to the angle of incidence made by the tube A with the cardboard.
For example, if the angle of incidence is 20° on the left side of a protractor (see figure arrangement), the angle of reflection at which we are able to hear the sound clearly will also be at 20° on the right side of the protractor.
∴ ∠ i = ∠ r    ➝ verifying Law I
We will also further observe that pipe 1, pipe 2 i.e, the incident ray, reflected ray and the normal lie on the same plane, verifying law II.

Question 3.
List the applications of sound.
Answer:
Applications of Ultrasonic Sound
1. Cleaning Technology :
Minute foreign particles can be removed from objects placed in a liquid bath by ultrasonic sound waves.

2. Industry:
To detect cracks and flaws in metal blocks.

Question 4.
Explain how do SONAR works?
Answer:
SONAR is the abbreviation for Sound Navigation And Ranging.

Question 1.
The frequency of a source of sound is 600 Hz. How many times does it vibrate in a minute?
Answer:
The number of vibrations (complete waves or cycles) produced in one second is called frequency of the wave.
Hence, in one minute 600 x 60 vibrations are produced = 36000 (Need clarification)

I. Answer the following questions.

Question 1.
“Sound needs a medium for propagation”. Justify with an experiment.
Answer: 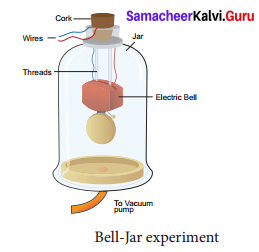 Sound needs a material like air, water, steel, etc. for its propagation. It cannot travel through vacuum. This can be demonstrated by the Bell-Jar experiment.

An electric bell and an airtight glass jar are taken. The electric bell is suspended inside the airtight jar. The jar is connected to a vacuum pump. If the bell is made to ring, we will be able to hear the sound of the bell. Now when the jar is evacuated with the vacuum pump, the air in the jar is pumped out gradually and the sound becomes feebler and feebler. We will not hear any sound, if the air is fully removed (if the jar has vacuum).

Question 2.
Name the characteristics that describe a sound.
Answer:
A sound wave can be described completely by five characteristics viz – amplitude, frequency, time period, wavelength and velocity or speed.

Question 5.
What is sound and how is it produced?
Answer:
Sound is a form of energy which produces the sensation of hearing. It is produced due to vibrations of different objects, eg. stretched vibrating wires and vibrating drums, etc.

Question 7.
What is a stethescope? What is the principle on which it works?
Answer:
Stethescope is a medical instrument used for listening to sounds produced in the body. In stethescopes, the sounds reach doctor’s ears by multiple reflections that happen in the connecting tube.

Question 8.
What is an ECG? How does it help in the field of medicine?
Answer:
The electrocardiogram (ECG) is one of the simplest and oldest cardiac investigations available. In ECG, the sound variations produced by heart is converted into electric signals. Thus an ECG is simply a representation of the electrical activity of the heart muscle as it changes with time. Usually it is printed on paper for easy analysis. The sum of this electrical activity, when amplified and recorded for just a few seconds is known as an ECG.