Question 3.
Two cylindrical rods of same length have the area of cross-section in the ratio 2:1. If both the rods are made up of same material, which of them conduct heat faster?
(a) Both rods
(b) Rod-2
(c) Rod-1
(d) None of them
Answer:
(c) Rod-1

Question 4.
In which mode of transfer of heat, molecules pass on heat energy to neighbouring molecules without actually moving from their positions?
(a) Radiation
(b) Conduction
(c) Convection
(d) Both B and C
Answer:
(b) Conduction

Question 5.
A device in which the loss of heat due to conduction, convection and radiation is minimized is
(a) Solar cell
(b) Solar cooker
(c) Thermometer
(d) Thermos flask
Answer:

Question 1.
Assertion(A): Food can be cooked faster in copper bottom vessels.
Reason (R): Copper is the best conductor of heat.
Answer:
(a) If both assertion and reason are true and reason is the correct explanation of assertion.

Question 3.
Assertion(A): When water is heated up to 100°C, there is no raise in temperature until all water gets converted into water vapour.

Reason(R): Boiling point of water is 10°C.
Answer:
(c) If assertion is true but reason is false.

Question 2.
Ice is kept in a double-walled container. Why?
Answer:
Ice is kept in a double-walled container so as to prevent melting of ice from the heat absorbed present in the immediate surroundings. The vacuum present in between the two walls prevents the transfer of heat from the first to the second wall and hence the ice remains in the solid form for a longer time period.

Question 3.
How does the water kept in an earthen pot remain cool?
Answer:
An earthen pot consists of small pores from which the water inside the pot constantly seeps out and gets evaporated due to the presence of high temperature around it. The evaporation process requires heat which is acquired from the surface of the pot, hence making the water and the pot cooler. 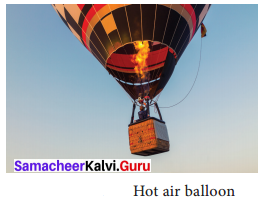 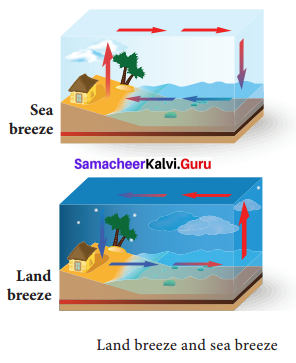 (iii) Winds: Air flows from area of high pressure to area of low pressure. The warm air molecules over hot surface rise and create low pressure. So, cooler air with high pressure flows towards low pressure area. This causes wind flow.
(iv) Chimneys: Tall chimneys are kept in kitchen and industrial furnaces. As the hot gases and smoke are lighter, they rise up in the atmosphere. 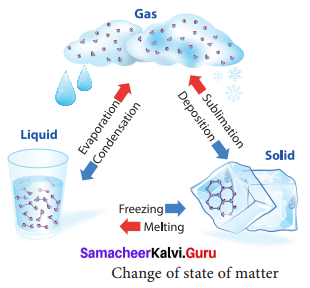 Thus, water changes its state when there is a change in temperature. 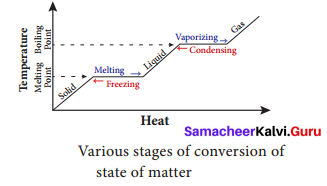 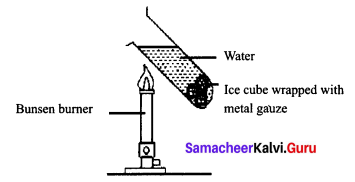 This leads to three things;

Question 1.
Take a glass of water and put some ice cubes into it. Observe it for some time. What happens? The ice cubes melt and disappear. Why did it happen?
Solution:
It is because heat energy in the water is transferred to the ice.

Question 2.
Take metal rods of copper, aluminium, brass and iron. Fix a match stick to one end of each rod using a little melted wax. When the temperature of the far ends reach the melting point of wax, the matches drop off. It is observed that the match stick on the copper rod would fall first, showing copper as the best conductor followed by aluminum, brass and then iron.
Answer:
You can do the activity by yourself.

Question 3.
Drop a few crystals of potassium permanganate down to the bottom of a beaker containing water. When the beaker is heated just below the crystals, by a small flame, purple streaks of water rise upwards and fan outwards.
Answer:
You can do the activity by yourself.

Question 1.
Define radiation.
Answer:
Radiation is a method of heat transfer that does not require particles to carry the heat energy.

Question 2.
What is heat energy?
Answer:
The sum of the kinetic and potential energy is called the internal heat energy of the molecules. This internal energy when flows out is called heat energy.

Question 4.
What is absolute zero?
Answer:
The temperature at which the pressure and volume of a gas theoretically reaches zero is called absolute zero.

Question 5.
What is the concept of temperature?
Answer:
Temperature is the degree of hotness or coolness of a body. The hotter the body is higher is its temperature.

Question 3.
What is latent heat of vapourisation. Explain with diagram.
Answer: 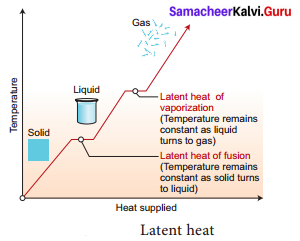 Question 4.
Give reasons why –