Question 1.
The tissue composed of a living thin-walled polyhedral cell is …………………
(a) Parenchyma
(b) Collenchyma
(c) Sclerenchyma
(d) None of the above
Answer:
(a) Parenchyma

Question 4.
Which of the following is a complex tissue?
(a) parenchyma
(b) collenchyma
(c) xylem
(d) Sclerenchyma
Answer:
(c) xylem

III. Fill in the blanks.

IV. State whether True or false. If false, write the correct statement

Question 1.
What are intercalary meristems? How do they differ from other meristems?
Answer: Parenchyma are simple permanent tissue composed of living cells. Parenchyma cells are thin-walled, oval, rounded or polygonal in shape with well-developed spaces among them. In aquatic plants. Parenchyma possesses intercellular air spaces and is named as Aerenchyma. When exposed to light, parenchyma cells may develop chloroplasts and are known as Chlorenchyma.
Functions: Parenchyma may store water in many succulent and xerophytic plants. It also serves the functions of storage of food reserves, absorption, buoyancy, secretion etc. 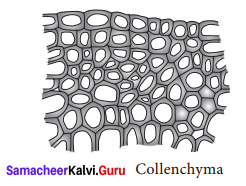 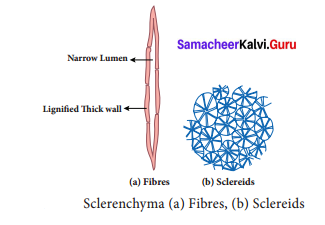 Question 2.
Write about the elements of Xylem.
Answer:
Xylem:
(i) Xylem is a conducting tissue that conducts water, mineral nutrients upward from root to leaves.
(ii) Xylem is composed of

4. Xylem parenchyma
These are living and thin-walled. The main function of xylem parenchyma is to store starch and fatty substances.

Question 3.
List out the differences between mitosis and meiosis.
Answer:

Question 1.
What is the consequence that occurs if all blood platelets are removed from the blood?
Answer:
If platelets are absent, this important defense reaction cannot occur, and protracted bleeding from small wounds (prolonged bleeding time) results.

Question 2.
Which are not true cells in the blood? Why?
Answer:
Platelets are actually not true cells but merely circulating fragments of cells. But even though platelets are merely cell fragments, they contain many structures that are critical to stopping bleeding. They contain proteins on their surface that allow them to stick to breaks in the blood vessel wall and also to stick to each other. They contain granules that can secrete other proteins required for creating a firm plug to seal blood vessel breaks.

Question 1.
Name the elements present in the phloem.
Answer:
Phloem like xylem is a complex tissue and consists of the following elements.

Question 2.
What is histology?
Answer:
The study of tissues is known as histology.

Question 3.
Describe amitosis.
Answer:
It is the simplest mode of cell division and occurs in unicellular animals, aging cells and in foetal membranes. During amitosis, nucleus elongates first, and a constriction appears in it which deepens and divides the nucleus into two, followed by this cytoplasm divides resulting in the formation of two daughter cells.

Question 1.
Give notes on:

Question 2.
Write a note on the nervous tissue using a diagram.
Answer:

Nervous tissue comprises of the nerve cells or neurons. They are the longest cells of the body. Neurons are the structural and functional units of the nervous tissue. The elongated and slender processes of the neurons are the nerve fibres. Each neuron consists of a cell body or cyton with nucleus and cytoplasm. The dendrons are short and highly branched protoplasmic processes of cyton. The axon is a single, long fibre like process that develops from the cyton and end up with fine terminal branches. They have the ability to receive stimuli from within or outside the body and send signals to different parts of the body. Many nerve fibres are bound together by the connective tissue.

(b) Lymph: Lymph is a colorless fluid filtered out of the blood capillaries. It consists of plasma and white blood cells. It mainly helps in the exchange of materials between blood and tissue fluids.

Question 4.
Differentiate between the following: