Question 4.
The cathode of an electrochemical reaction involves …………….
(a) oxidation
(b) reduction
(c) neutralisation
(d) catenation
Answer:
(b) reduction

Question 6.
Which of the following does not contain natural dyes?
(a) Potato
(b) Beetroot
(c) Carrot
(d) Turmeric
Answer:
(a) Potato

Question 7.
This type of food protect us from deficiency diseases.
(a) Carbohydrates
(b) Vitamins
(c) Proteins
(d) Fats
Answer:
(b) Vitamins

Question 9.
The groups responsible for the colour of an organic compound is called ………………….
(a) isotopes
(b) auxochrome
(c) chromogen
(d) chromophore
Answer:
(d) chromophore

Question 1.
What is Chemotherapy?
Answer:
Treatment of certain diseases by destroying the invading organism without damaging the cells of the host, by the use of certain organic compounds is known as Chemotherapy.

Question 1.
Explain the types of dyes based on their method of application.
Answer:
1. Acid Dyes

Question 2.
Sudha met with a fire accident. What kind of drug(s), she must take?
Answer:

Question 3.
The soil pH of cropland is 5. What kind of fertilizers should be used in that land?
Answer:
Organic fertilizer like compost can be used to maintain pH of soil at 6.5, which is ideal for soil and to moderate the acidity.

Question 1.
Explain the structure of an electrolytic cell.
Answer: 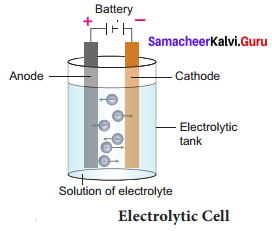 Question 3.
What are drugs? What are their characteristics?
Answer:
The chemicals used for treating diseases are termed as drug.
Characteristics of drugs: A drug must possess the following;

Question 6.
Write a note on Natural dyes.
Answer:
Many natural dyes have been known from a long time. These are obtained from vegetable sources.