Question 3.
Rent is the reward for the use of
(a) capital
(b) labour
(c) land
(d) organization
Answer:
(c) land

Question 5.
The Classical Theory of Rent was propounded by
(a) Ricardo
(b) Keynes
(c) Marshall
(d) Walker
Answer:
(a) Ricardo

Question 18.
“Wages as a sum of money are paid under contract by an employer to a worker for service rendered”- Who said this?
(a) Benham
(b) Marshall
(c) Walker
(d) J.S.Mill
Answer:
(a) Benham

Part – B
Answer the following questions in one or two sentences

Question 24.
Distinguish between real and money wages.
Answer:
Real wages :
Wages paid in terms of goods and services. It refers to the purchasing power of money wages.

Money wages :
Nominal wages are referred to as wages paid in terms of money.

Question 25.
What do you mean by interest?
Answer:
Interest is the price paid for the use of capital in any market.

Question 26.
What is profit?
Answer:
Profit is the amount left with the entrepreneur after he has made payments for all the other factors of production.

Part – C
Answer the following questions in One Paragraph

Question 28.
What are the motives of demand for money?
Answer:
1. Transaction motive :
It relates to the desire of the people to hold cash for the current transactions.
Mt=f (y)

2. Precautionary motive :
It relates to the desire of the people to hold cash to meet unexpected or unforeseen expenditures.
Mp = f (y)

3. Speculative motive :
It relates to the desire of the people to hold cash in order to take advantage of market movements regarding future changes in the price of bonds and securities in the capital market.
Ms = f (i)

Question 29.
List out the kinds of wages:
Answer:
Wages are divided into four types.

When any one of these innovations is introduced by an entrepreneur, it leads to a reduction in the cost of production and thereby brings profit to an entrepreneur. To obtain profit continuously, the innovator needs to innovate continuously. The real innovators do so. Imitative entrepreneurs cannot innovate.

Question 34.
Write a note on the Risk-bearing Theory of Profit.
Answer:

Part – D
Answer the following questions in about a page

Explanation of the theory :
Each factor is rewarded according to its marginal productivity.

Marginal product:
The marginal product of a factor of production means the addition made to the total product by employment of an additional unit of that factor.

Marginal physical product (MPP) :
The MPP of a factor is the increment in the total product obtained by the employment of an additional unit of that factor.

Statement of the theory: 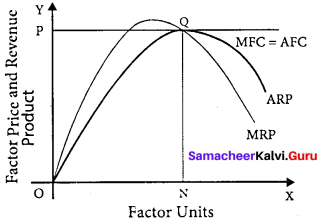 Question 36.
Illustrate the Ricardian Theory of Rent.
Answer:
The classical theory of rent is called the “Ricardian theory of rent”.
Definition:
Rent is that portion of the produce of the earth which is paid to the landlord for the use of the original and indestructible powers of the soil.

Statement of the theory with an illustration:
Assume that some people settle on the newly discovered island. People will first cultivate the most fertile ‘A’ grade land. They produce 40 bags of paddy.

The land which yields rent is called “intra-marginal land”.
Rent indicates the differential advantage of the superior land over the marginal land.
Ricardian Theory’ of Rent :

Diagrammatic illustration:
The X-axis represents various grades of land and the Y-axis yield per acre (in bags). OA, AB, and BC are the ‘A’, ‘B’, ‘C’ grade lands respectively.

The ‘C’ grade land is the no-rent land. A and B grade lands are “intra-marginal lands. The economic rent yielded by ‘A’ and ‘B’ grade lands is equal to the shaded area of their respective rectangles.

Demand for Loanable Funds
The demand for loanable funds depends upon the following:

1. Demand for Investment [I] 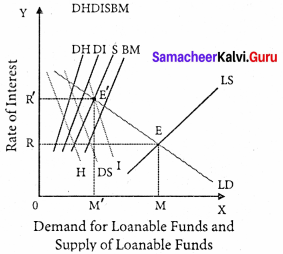 Supply of Loanable funds:
The supply of loanable funds depends upon the following four sources:

1. Savings [S]: Loanable funds comes from savings. According to this theory, savings may be of two types, namely,

2. Bank Credit [BC]: Bank credit is another source of loanable funds. Commercial banks create credit and supply loanable funds to the investors.

3. Dishoarding [DH]: Dishoarding means bringing out the hoarded money into use and thus it constitutes a source of supply of loanable funds. 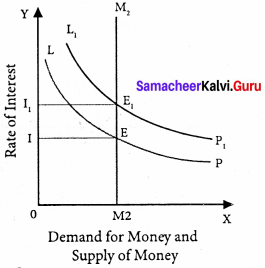 LP is the liquidity preference curve. M2 shows the supply curve of money to satisfy speculative motive. Both curves intersect at the point E which is the equilibrium. Here, rate of interest is I.

If liquidity preference increases from LP to L1 P1 the supply of money remains constant, the rate of interest increase from OI to OI1 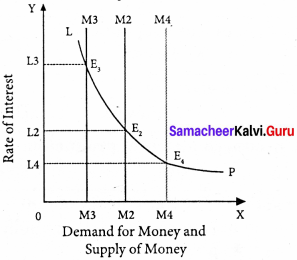 Part -A
Choose the best options

Choose the odd one out

Analyze the reason for the following

Fill in the blanks with the suitable option given below

Part – B
Answer the following questions in one or two sentences

Question 4.
What is the marginal product? Define marginal physical product ?
Answer:
The addition made to the total product by the employment of an additional unit of that factor.

Question 6.
What is “Wage Fund“.
Answer:
According to Mill, “Every employer will keep a given amount of capital for payment to the workers”. It is known as the “Wage Fund”.

Part – C
Answer the following questions in One Paragraph

Question 6.
What are the kinds of profit?
Answer:
1. Monopoly profit:
Profit earned by the firm because of its monopoly control.

2. Windfall profit:
Some times, profit arises due to changes in the price level. Profit is due to unforeseen factors.

3. Profit as a functional reward:
Just like rent, wage and interest, profit is earned by the entrepreneur for his entrepreneurial function.

Question 7.
State the residual claimant theory of wage.
Answer:
This theory was propounded by the American economist F.A. Walker in 1875, in his book political economy. According to this theory, wage is the residual portion after paying the remuneration of all the other three factors namely land capital and organization.