Question 4.
Depletion of which gas in the atmosphere can lead to an increased incidence of skin cancer?
(a) Ammonia
(b) Methane
(c) Nitrous oxide
(d) Ozone
Answer:
(d) Ozone

Question 12.
What is ozone hole?
Answer:

Question 15.
Hpw do forests help in maintaining the climate?
Answer:
Forests play a major role in regulating the CO2 level in the atmosphere. As the result global warming in highly reduced.

Question 16.
How do sacred groves help in the conservation of biodiversity?
Answer:

Question 17.
Which one gas is most abundant out of the four commonest greenhouse gases? Discuss the effect of this gas on the growth of plants?
Answer:
Carbondioxide is the most abundant greenhouse gas. Increase in CO2 level in the air decreases the uptake of nitrogen components leading to protein deficiency and chlorophyll formation.

Question 18.
Suggest a solution to water crisis and explain its advantages.
Answer:

Question 19.
Explain afforestation with case studies.
Answer:
Afforestation is planting of trees where there was no previous tree coverage and the conversion of non-forested lands into forests by planting suitable trees to retrieve the vegetation. Example: Slopes of dams afforesed to reduce water run-off, erosion and siltation. It can also provide a range of environmental sendees including carbon sequestration, water retention. The Man who Single Handedly Created a Dense Forest

Jadav “Molai” Payeng (bom 1963) is an environmental activist has single-handedly planted a forest in the middle of a barren wasteland. This Forest Man of India has transformed the world’s largest river island, Majuli, located on one of India’s major rivers, the Brahmaputra, into a dense forest, home to rhinos, deers, elephants, tigers and birds. And today his forest is larger than Central Park.

Former vice-chancellor of Jawahar Lai Nehru University, Sudhir Kumar Sopory named Jadav Payeng as Forest Man of India, in the month of October 2013. He was honoured at the Indian Institute of Forest Management during their annual event Coalescence. In 2015, he was honoured with Padma Shri, the fourth highest civilian award in India. He received honorary doctorate degree from Assam Agricultural University and Kaziranga University for his contributions.

Question 7.
The production of woody plants combined with pasture is referred to system.
Answer:
Silvopasture 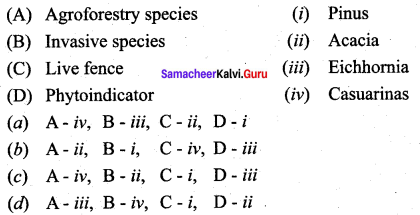 Question 1.
What are greenhouse gases? Give an example.
Answer:
The gases that capture heat are called Green House Gases.
E.g: Carbon dioxide (CO2)

Question 5.
List out the anthropogenic sources of Nitrous oxide.
Answer:
Man-made sources include nylon and nitric acid production, use of fertilizers in agriculture, manures cars with catalytic converter and burning of organic matter.

Question 6.
What is Dobson unit?
Answer:
Dobson Unit is the unit of measurement for total ozone. One DU is the number of molecules of ozone that would be required to create a layer of pure ozone 0.01 millimetre thick at a temperature of 0° C and a pressure of 1 atmosphere.

Question 7.
What do you mean by good ozone and bad ozone?
Answer:

Question 9.
Define ozone hole. Name any one potent chemical that is responsible for the effect.
Answer:
The decline in the thickness of the ozone layer over restricted area is called Ozone hole. Chlorofluorocarbons (CFC) damages the ozone layer to a great extent.

Question 10.
Where did Montreal Protocol was held? State its objectives.
Answer:
The International treaty called the Montreal Protocol (1987) was held in Canada on substances that deplete ozone layer and the main goal of it is gradually eliminating the production and consumption of ozone depleting substances and to limit their damage on the Earth’s ozone layer.

Question 13.
Define the term Agroforestry. Name any two major tree species cultivated in Agroforestry.
Answer:
Agroforestry is an integration of trees, crops and livestock on the name plot of land. The commercial Agroforestry trees are casuarina and Eucalyptus.

Question 14.
What is silvopasture system? How it helps economy?
Answer:
The production of woody plants combined with pasture is referred to silvopasture system. The trees and shrubs may be used primarily to produce fodder for livestock or they may be grown for timber, fuel wood and fruit or to improve the soil.

Question 15.
Mention the name of any four plant species that are widely used as live fences in agricultural practicer.
Answer:

Question 16.
Define social forestry.
Answer:
Social forestry refers to the management of forests and afforestation on barren lands with the purpose of helping the environmental, social and rural development and benefits.

Question 19.
Point out the adverse effect caused by invasive species.
Answer:
Invasive species are fast growing and are more adapted. They alter the soil system by changing litter quality thereby affecting the soil community, soil fauna and the ecosystem processes. It has a negative impact on decomposition in the soils by causing stress to the neighbouring native species.

Question 22.
Give the names of any four famous sacred grooves in Tamil Nadu.
Answer:

Question 23.
What does the term ‘Endemic’ refers to?
Answer:
Any species found restricted to a specified geographical area is referred to as ENDEMIC.

Question 25.
What is carbon sequestration?
Answer:
Carbon sequestration is the process of capturing and storing CO2 which reduces the amount of CO2 in the atmosphere with a goal of reducing global climate change.

Question 27.
Explain the term Carbon sink.
Answer:
Any system having the capacity to accumulate more atmospheric carbon during a given time interval than releasing CO2.
Example: forest, soil, ocean are natural sinks. Landfills are artificial sinks.

Question 28.
How EIA is beneficial to a society?
The benefits of EIA to society
Answer:

Question 30.
List out the effects of global warming.
Answer:

Question 32.
What are the adverse effects of global warming on plants?
Answer:

Question 34.
Ozone acts a a natural sun screen – Justify.
Answer:
Ozone depletion in the stratosphere results in more UV radiations especially UV B radiations (shortwaves). UV B radiation destroys biomolecules (skin ageing) and damages living tissues. UV – C is the most damaging type of UV radiation, but it is completely filtered by the atmosphere (ozone layer). UV – a contribute 95% of UV radiation which causes tanning burning of skin and enhancing skin cancer. Hence the uniform ozone layer is critical for the wellbeing of life on earth.

An example for CDM project activity, is replacement of conventional electrification projectswith solar panels or other energy efficient boilers. Such projects can earn Certified Emission I Reduction (CER) with credits / scores, each equivalent to one tonne of CO2, which can be counted towards meeting Kyoto targets.

Question 36.
What are the major activities carried out by forestry extension centres?
Answer:

Question 37.
Prosopis juliflora, though an alien invasive species to India, it is beneficial to certain extent. Give reason.
Answer:
Prosopis juliflora is used to arrest wind erosion and stabilize sand dunes on coastal and desert areas. It can absorb hazardous chemicals from soil and it is the main source of charcoal.

Question 38.
Write a short note on Chipko Movement.
Chipko Movement:
Answer:
The tribal women of Himalayas protested against the exploitation of forests in 1972. Later on it transformed into Chipko Movement by Sundarlal Bahuguna in Mandal village of Chamoli district in 1974. People protested by hugging trees together which were felled by a sports goods company. Main features of Chipko movement were,

Question 39.
Give a brief account on In-situ conservation.
Answer:
In-situble conservation means conservation and management of genetic resources in their natural habitats. Here the plant or animal species are protected within the existing habitat. Forest trees, medicinal and aromatic plants under threat are conserved by this method. This is carried out by the community or by the State conservation which include wildlife, National park and Biosphere reserve. The ecologically unique and biodiversity rich regions are legally protected as wildlife sanctuaries, National parks and Biosphere reserves. Megamalai, Sathyamangalam wildlife, Guindy and Periyar National park, and Western ghats, Nilgiris, Agasthyamalai and Gulf of Mannar are the biosphere reserves of Tamil Nadu.

Question 40.
What do you mean by Biochar? How it helps the environment?
Answer:
Biochar is a long term method to store carbon. To increase plants ability to store more carbon, plants are partly burnt such as crop waste, waste woods to become carbon rich slow decomposing substances of material called Biochar. It is a kind of charcoal used as a soil amendment. Biochar is a stable solid, rich in carbon and can endure in soil for thousands of years. Like most charcoal, biochar is made from biomass via pyrolysis. (Heating biomas in low oxygen environment) which arrests wood from complete burning.

Biochar thus has the potential to help mitigate climate change via carbon sequestration. Independently, biochar when added to soil can increase soil fertility of acidic soils, increase agricultural productivity, and provide protection against some foliar and soil borne diseases. It is a good method of preventing waste woods and logs getting decayed instead we can convert them into biochar thus converting them to carbon storage material.

Question 41.
Explain the role of lakes in an ecosystem.
Answer:
Lakes as a storage of rain water provides drinking water, improves ground water level and preserve the fresh water bio-diversity and habitat of the area where in occurs.

Question 44.
How Eichhornia crassiper spoils the Indian ecosystem?
Answer:
Eichhornia crassipes is an invasive weed native to South America. It was introduced as aquatic ornamental plant, which grows faster throughout the year. Its widespread growth is a major cause of biodiversity loss worldwide. It affects the growth of phytoplanktons and finally changing the aquatic ecosystem.

It also decreases the oxygen content of the waterbodies which leads to eutrophication. It poses a threat to human health because it creates a breeding habitat for disease causing mosquitoes (particularly Anopheles) and snails with its free floating dense roots and semi submerged leaves. It also blocks sunlight entering deep and the waer ways hampering agriculture, fisheries, recreation and hydropower.

Question 45.
Write a comparative note on Carbon Foot Print (CFP).
Answer:
Every human activity leaves a mark just like our footprint. This Carbon foot print is the total amount of green house gases produced by human activities such as agriculture, industries, deforestation, waste disposal, buring fossil fuels directly or indirectly. It can be measured for an individual, family, organisation like industries, state level or national level. It is usually estimated and expressed in equivalent tons of CO2 per year.

The burning of fossil fuels releases CO2 and other green house gases. In turn these emissions trap solar energy and thus increase the global temperature resulting in ice melting, submerging of low lying areas and inbalance in nature like cyclones, tsunamis and extreme weather conditions.
To reduce the carbon foot print we can follow some practices like

Question 46.
Write in detail about Remote sensing and its uses.
Answer:
Remote Sensing is the process of detecting and monitoring the physical characteristics of an area by measuring its reflected and emitted radiation at a distance from the targeted area. It is an tool used in conservation practices by giving exact picture and data on identification of even a single tree to large area of vegetation and wild life for classification of land use patterns and studies, identification of biodiversity rich or less areas for futuristic works on conservation and maintenance of various species including commercial crop, medicinal plants and threatened plants.
Specific uses

Question 1.
Name the movement launched by the people of Mandal village to protect the trees by hugging them.
Answer:
Chipko movement.

Question 2.
Recently in January 2019, our Tamil Nadu Government had imposed a ban on using 14 different products of plastic origin. Mention any six plastic products that you know.
Answer:

Question 3.
Due to plastic ban scheme in our state, people are gradually switching over to other optionals for daily activities. As a biology student, suggest few eco-friendly alternatives for this issue.
Answer: