PART – 1
I. Choose The Correct Answer

Question 2.
We wish to cover a chessboard with dominoes,

Question 5.
If Fibonacci number is defined recursively as

Question 1.
What is an invariant?
Answer:
An expression involving variables, which remains unchanged by an assignment to one of these variables is called as an invariant of the assignment.

Question 5.
What is recursive problem solving?
Answer:
Recursion is a method of solving problems that involves breaking a problem down into smaller and smaller sub problems until user gets in to a small problem that it can be solved trivially. Usually recursion involves a function calling itself. While it may not seem like much on the surface, recursion allows us to write elegant solutions to problems that may otherwise be very difficult to program.

Initially u = 0 and continuous to be even in all the three cases. Therefore u is always even. Invariant: u is even (i. e. No. of right side up tumblers are always even)
But in the final stage (Goal), u = 7 and v = 0 i. e. u is odd.
Therefore it is not possible to reach a situation where all the tumblers are right side up.

Question 2.
A knockout tournament is a series of games. Two players complete in each game; the loser is knocked out (i.e. does not play any more), the winner carries on. The winner of the tournament is the player that is left after all other players have been knocked out. Suppose there are 1234 players in a tournament. How many games are played before the tournament winner is decided?
Answer:

Question 3.
King Vikramaditya has two magic swords. With one, he can cut off 19 heads of a dragon, but after that the dragon grows 13 heads. With the other sword, he can cut off 7 heads, but 22 new heads grow. If all heads are cut off, the dragon dies. If the dragon has originally 1000 heads, can it ever die? (Hint: The number of heads mod 3 is invariant.)
Answer:
No. of heads of dragon = 1000
sword 1 : cuts 19 heads but 13 heads grow back.
sword 2 : cuts 7 heads but 22 heads grow back.
Let n be the number of heads of the dragon at initial state.

Note:
In the above two cases either 6 heads are removed or 15 heads added. Both 6 and 15 are multiples of 3.
Therefore repeating case 1 and case 2 recursively will either reduce or increase dragon heads in multiples of 3.
That is the invariant is n mod 3.
If n mod 3 = 0 then there is a possibility that the dragon dies.
But 1000 is not a multiple of 3 1000 mod 3 = 1 ≠ 0
It is not possible to kill the dragon. The dragon never dies.

Question 2.
Power can also be defined recursively as

Construct a recursive algorithm using this definition. How many multiplications are needed to calculate a10?
Answer:
Power:
power (5, 2) = 5 x 5 = 25
power (x, n) raise x to the power n 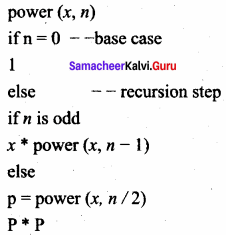 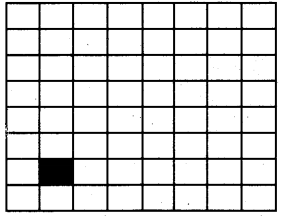 We can cover it with one triominoe and solve the problem. 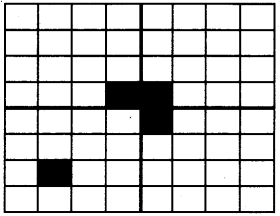 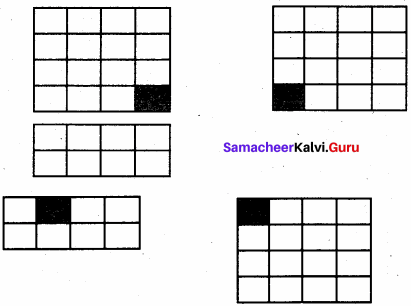 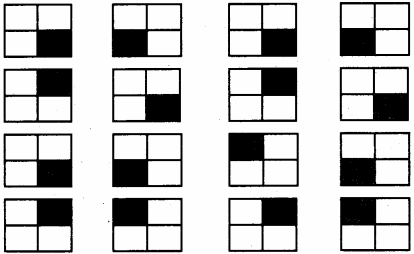 4n – 1 – 1 is also a multiple of 3
In this, the 2n x 2n board is reduced to boards of size 2×2 having are square covered. A triominoe can be placed in each of these boards and hence the whole original 2n x 2n . board is covered with triominoe with out overlap.

PART – 1
I. Choose the correct answer

Question 13.
Which of the following is updated when each time the loop body is executed?
(a) data type
(b) subprogram
(c) function
(d) variable
Answer:
(d) variable

Question 1.
When the loop variant will be true?
Answer:
The loop invariant is true before the loop body and after the loop body, each time.

Question 1.
Write a note on Recursion.
Answer:
Recursion:
Recursion is another algorithm design technique, closely related to iteration, but more powerful. Using recursion, we solve a problem with a given input, by solving the same problem with a part of the input, and constructing a solution to the original problem from the solution to the partial input.

Question 2.
Write down the steps to be taken to construct a loop.
Answer: 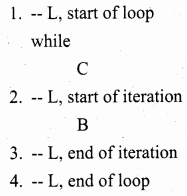 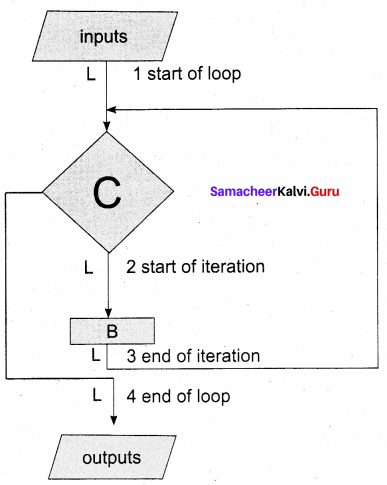 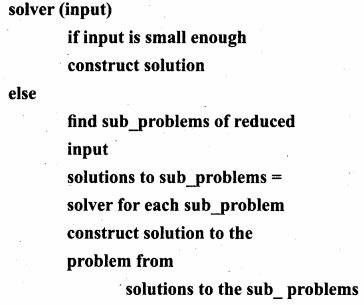 Question 3.
Give an example for loop invariant.
Answer:
The loop invariant is true in four crucial points in a loop. Using the loop invariant, we can construct the loop and reason about the properties of the variables at these points.
Example:
Design an iterative algorithm to compute an. Let us name the algorithm power(a, n). For example,
power(10, 4) = 10000
power (5, 3) = 125
power (2, 5) = 32
Algorithm power(a, n) computes an by multiplying a cumulatively n times,

Question 4.
There are 6 equally spaced trees and 6 sparrows sitting on these trees,one sparrow on each tree. If a sparrow flies from one tree to another, then at the same time, another sparrow flies from its tree to some other tree the same distance away, but in the opposite direction. Is it possible for all the sparrows to gather on one tree?
Answer:
Let us index the trees from 1 to 6. The index of a sparrow is the index of the tree it is currently sitting on. A pair of sparrows flying can be modeled as an iterative step of a loop. When a sparrow at tree i flies to tree i + d, another sparrow at tree j flies to tree j – d. Thus, after each iterative step, the sum S of the indices of the sparrows remains invariant. Moreover, a loop invariant is true at the start and at the end of the loop.
At the start of the loop, the value of the invariant is
S = 1 + 2 + 3 + 4 + 5 + 6 = 21
When the loop ends, the loop invariant has the same value. However, when the loop ends, if all the sparrows were on the same tree, say k, then S = 6k

Answer:
The recursive definition can be expressed as a recursive solver for computing power(a, n). 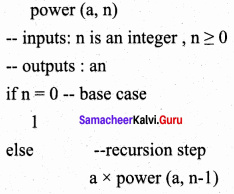 The recursive process resulting from power(2, 5) 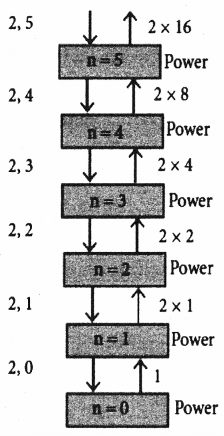