Question 6.
Two groups (A & B) of bean plants of similar size and same leaf area were placed in identical conditions. Group A was exposed to light of wavelength 400 – 450 nm and Group B to light of wavelength of 500 – 550 nm. Compare the photosynthetic rate of the 2 groups giving reasons.
Answer:
The rate of photosynthesis in group A bean plants is more than what is found in Group B plants because the rate of absorption of light is more at the wavelength is less beyond the wavelength of 500 – 550 nm.

Question 7.
A tree is believed to be releasing oxygen during night time. Do you believe the truthfulness of this statement? Justify your answer by giving reasons?
Answer:
Yes, a tree is believed to be releasing O2 during night time because at night CAM plants fix CO2 with the help of phospho Enol Pyruvic acid and produce oxala acetic acid, which is converted into malic acid like C4 cycle.

Question 8.
Grasses have an adaptive mechanism to compensate. photorespiratory losses – Name and describe the mechanism.
Answer:
Rate of respiration is more in light than in dark. Photorespiration is the excess respiration taking place in photosynthetic cells due to absence of CO2 and increase of O2. This condition changes the carboxylase role of RUBISCO into oxygenase. C2 Cycle takes place in chloroplast, peroxisome and mitochondria. RUBP is converted into PGA and a 2C – compound phosphoglycolate by Rubisco enzyme in chloroplast. Since the first product is a 2C – compound, this cycle is known as C2 Cycle. Phosphoglycolate by loss of phosphate becomes glycolate.

Glycolate formed in chloroplast enters into peroxisome to form glyoxylate and hydrogen peroxide. Glyoxylate is converted into glycine and transferred into mitochondria. In mitochondria, two molecules of glycine combine to form serine. Serine enters into peroxisome to form hydroxy pyruvate. Hydroxy pyruvate with help of NADH + H+ becomes glyceric acid. Glyceric acid is cycled back to chloroplast utilising ATP and becomes Phosphoglyceric acid (PGA) and v enters into the Calvin cycle (PCR cycle). Photorespiration does not yield any free energy in the form of ATP. Under certain conditions 50% of the photosynthetic potential is lost because of Photorespiration

Question 10.
When there is plenty of light and higher concentration of O2, what kind of pathway does the plant undergo? Analyse the reasons.
Answer:
The rate of photosynthesis decreases when there is an increase of oxygen concentration. This Inhibitory effect of oxygen was first discovered by Warburg (1920) using green algae, Chlorella.

Question 2.
Who has first explained the importance chlorophyll in photosynthesis:
(a) Joseph Priestly
(b) Dutrochet
(c) Stephen Hales
(d) Lovoisier
Answer:
(b) Dutrochet

Question 12.
Which one of the photosynthetic pigments is called shield pigment:
(a) carotenes
(b) chlorophyll ‘b’
(c) pheophytin
(d) carotenoids
Answer:
(d) carotenoids

Question 17.
Find out the odd one:
(a) Ferredoxin
(b) Succinate
(c) Cytochrome b6 – f
(d) Plastocyanin
Answer:
(b) Succinate

Question 1.
What is the function of plant in the universe?
Answer:
Plants are the major machinery which produce organic compounds like carbohydrates,lipids, proteins, nucleic acids and other biomolecules.

Question 4.
What is thylakoid? Explain how they are arranged?
Answer:
A sac like membranous system called thylakoid or lamellae is present in stroma and they are arranged one above the other forming a stack of coin like structure called granum (plural grana).

Question 8.
What are Xanthophylls?
Answer:
Yellow (C40H56O2) pigments are like carotenes but contain oxygen. Lutein is responsible for yellow colour change of leaves during autumn season. Examples: Lutein, Violaxanthin and Fueoxanthin.

Question 11.
Define the term fluorescence.
Answer:
The electron from first singlet state (SI) returns to ground state (SO) by releasing energy in the form of radiation energy (light) in the red region and this is known as fluorescence.

Question 14.
What are the phases of dark reaction?
Answer:
Dark reaction consists of three phases:

Question 17.
What, are the internal factors, that affect photosynthesis?
Answer:
Pigments, protoplasmic factor, accumulation of carbohydrates, anatomy of leaf and hormones.

Question 19.
How does water affect the rate of photosynthesis?
Answer:
Photolysis of water provides electrons and protons for the reduction of NADP, directly. Indirect roles are stomatal movement and hydration of protoplasm. During water stress, supply of NADPH + H+ is affected.

Question 2.
How is the chlorophyll synthesized?
Answer:
Chlorophyll is synthesized from intermediates of respiration and photosynthesis. Succinic acid an intermediate of Krebs cycle is activated by the addition of coenzyme A and it reacts with a simple amino acid glycine and the reaction goes on to produce chlorophyll ‘a’. Biosynthesis of chlorophyll ‘a’ requires Mg, Fe, Cu, Zn, Mn, K and nitrogen. The absence of any one of these minerals leads to chlorosis.

Question 3.
What are phycobilins?
Answer:
They are proteinaceous pigments, soluble in water, and do not contain Mg and Phytol tail. They exist in two forms such as:

Question 5.
What is meant by ground state?
Answer:
The action of photon plays a vital role in excitation of pigment molecules to release an electron. When the molecules absorb a photon, it is in excited state. When the light source turned off, the high energy electrons return to their normal low energy orbitals as the excited molecule goes back to its original stable condition known as ground state.

Question 6.
Explain the term phosphorescence.
Answer:
Electron from Second Singlet State (S2) may return to next higher energy level (S1) by losing some of its extra energy in the form of heat. From first singlet state (S1) electron further drops to first triplet state (T1). Triplet State is unstable having half life time of 10-3 seconds and electrons returns to ground state with emission of light in red region called as phosphorescence. Phosphorescence is the delayed emission of absorbed radiations. Pathway of electron during Phosphorescence:
S2 → S1 → T1 → S0

Question 7.
Describe the method of carboxylation.
Answer:
The acceptor molecule Ribulose 1,5 Bisphosphate (RUBP) a 5 carbon compound with the help of RUBP carboxylase oxygenase (RUBISCO) enzyme accepts one molecule of carbon dioxide to form an unstable 6 carbon compound. This 6C compound is broken down into two molecules of 3 – carbon compound phospho glyceric acid (PGA).

Question 8.
Explain the phase – 3 of dark reaction.
Answer:
Regeneration of RUBP involves the formation of several intermediate compounds of 6 – carbon, 5 – carbon, 4 – carbon and 7 – carbon skeleton. Fixation of one carbon dioxide requires 3 ATPs and 2 NADPH + H+, and for the fixation of 6 CO2 requires 18 ATPs and 12 NADPH + H+ during C3 cycle. One 6 carbon compound is the net gain to form hexose sugar.

Question 9.
What is meant by dicarfioxylic acid pathway?
Answer:
C4 pathway is completed in two phases, first phase takes place in stroma of mesophyll cells, where the CO2 acceptor mblecule is 3 – Carbon compound, phospho enol pyruvate (PEP) to form 4 – carbon Oxalo acetic acid (OAA). The first product is a 4 – carbon and so it is named as C4 cycle. Oxalo acetic acid is a dicarbokylic acid and hence this cycle is also known as dicarboxylic acid pathway.

Question 11.
What is the type of carbon pathway in xerophytic plants?
Answer:
Crassulacean Acid Metabolism or CAM cycle is one of the carbon pathways identified in succulent plants growing in semi – arid or xerophytic condition. This was first observed in crassulaceae family plants like Bryophyllum, Sedum, Kalanchoe and is the reason behind the name of this cycle. It is also noticed in plants from other families eg: Agave, Opuntia, Pineapple and Orchids.

2. Action Spectrum: The effectiveness of different wavelength of light on photosynthesis is measured by plotting against quantum yield. The curve showing the rate of photosynthesis at different wavelengths of light is called action spectrum. From the graph showing action spectrum, it can be concluded that maximum photosynthesis takes place in blue and red region of the spectrum. This wavelength of the spectrum is the absorption maxima for Chlorophyll (a) and Chlorophyll (b). The Action Spectrum is instrumental in the discovery of the existence of two photosystems in O2 evolving photosynthesis. 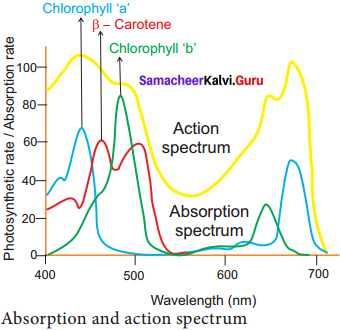 Question 3.
Explain the process of photolysis of photolysis water with suitable diagram.
Answer:
The process of Photolysis is associated with Oxygen Evolving Complex (OEC) or water splitting complex in pigment system II and is catalysed by the presence of Mn++ and Cl–. When the pigment system II is active it receives light and the water molecule splits into OH– ions and H+ ions. The OH– ions unite to form water molecules again and release O2 and electrons. Photolysis of water is due to strong oxidant which is yet unknown and designated as Z or Yz. 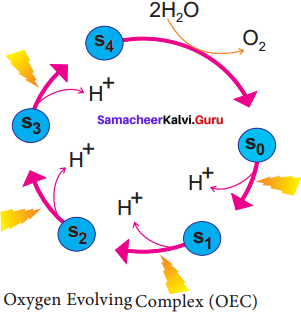 Widely accepted theory proposed by Kok et al., (1970) explaining photo – oxidation of water is water oxidizing clock (or) S’ State Mechanism. It consists of a series of 5 states called as S0, S1, S2, S3 and S4. Each state acquires positive charge by a photon (hv) and after the S4 state it acquires 4 positive charges, four electrons and evolution of oxygen. Two molecules of water go back to the S0. At the end of photolysis 4H+, 4e– and O2 are evolved from water.

Question 4.
Describe the process of non – cyclic photophosphorylation.
Answer:
When photons are activated reaction centre of pigment system II (P680), electrons are moved to the high energy level. Electrons from high energy state passes through series of electron carriers like pheophytin, plastoquinone, cytochrome complex, plastocyanin and finally accepted by PS I (P700). During this movement of electrons from PS II to PS I ATP is generated. PS I (P700) is activated by light, electrons are moved to high energy state and accepted by electron acceptor molecule ferredoxin reducing Substance (FRS). During the downhill movement through ferredoxin, electrons are transferred to NADP+ and reduced into NADPH + H+ (H+ formed from splitting of water by light). 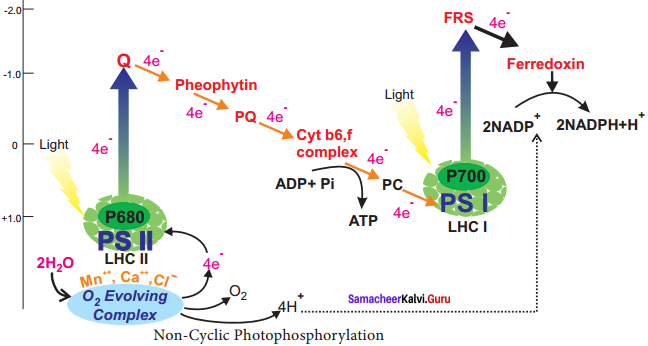 Electrons released from the photosystem II are not cycled back. It is used for the reduction of NADP+ in to NADPH + H+. During the electron transport it generates ATP and hence this type of photophosphorylation is called non – cyclic photophosphorylation. The electron flow looks like the appearance of letter ‘Z’ and so known as Z scheme.

Question 5.
Explain chemiosmotic theory with suitable I diagram.
Answer:
Chemiosmotic theory was proposed by P. Mitchell (1966). According to this theory electrons are transported along the membrane through PS I and PS II and connected by Cytochrome b6 – f complex. The flow of electrical current is due to difference in electrochemical potential of protons across the membrane. Splitting of water molecule takes place inside the membrane. Protons or H+ ions accumulate within the lumen of the thylakoid (H+ increase 1000 to 2000 times). As a result, proton concentration is increased inside the thylakoid lumen. 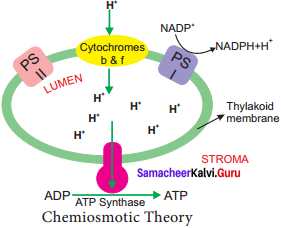 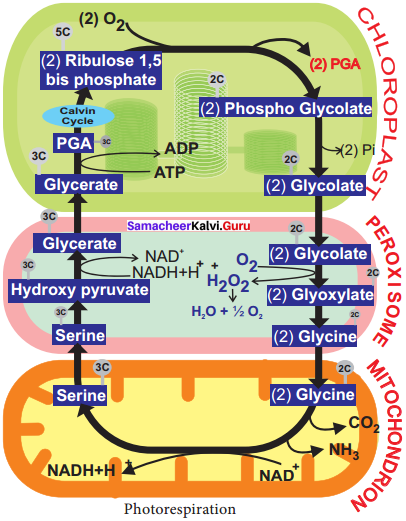 CHECK YOUR GRASP
Textbook Page No: 123

Question 1.
(i) Name the products produced from Non – Cyclic photophosphorylation?
(ii) Why does PS II require electrons from water?
(iii) Can you find the difference in the Pathway of electrons during PS I and PS II?
Answer:
(i) The products of non-cyclic phosphorylation are NADPH + H+ and ATP.
(ii) The electrons received from water are responsible for the production of ATP and NADPH + H+ through electron transport system in PS I and PS II.
(iii) Yes. Electron flow starts from P680 through a series of electron carrier molecules and finally reaches P700 (PSI). From PS I the electrons travels downhill through ferredoxin, NADP+ is recorded to NADPH + H+.